Who have stood out this season? We review the most important steer-bullfighters of 2019

In the second ranking we find the list of young steer-bullfighters, the quarry of those who will soon be bullfighters and who currently has an added difficulty due to the low number of bullfights in their category. Some seem not to understand that steer-bullfighting is the future of the Fiesta and it is essential to encourage them and give opportunities to new values.

Even so, fortunately there are always success stories that make us excited. These are the steer-bullfighters who have closed an important season in 2019;

Tomás Rufo, the big surprise of the Autumn Fair

The steer-bullfighter from Toledo has not been among the first in the ranks in terms of bullfights but, without a doubt, it has been for the success achieved: open the Main Gate (‘Puerta Grande’) of Las Ventas.

On September 27, Tomás Rufo made the walk at the first afternoon of the Autum fair and signed one of the most blunt afternoons of the Madrid season, cutting an ear to each of his lot from Fuente Ymbro and touching the sky of Alcalá Street with barely 20 years.

The one from Pepino (Toledo) had won the position in the Autumn Fair winning the Night Bullfights Contest of Las Ventas on August 1; in which final he cut an ear to a steer from El Cortijillo. One ear at the Bilbao Festival and another at the Pilar Fair in October signed their performances in first-year bullrings this year, ending with a total of 11 bullfights and 14 ears cut. 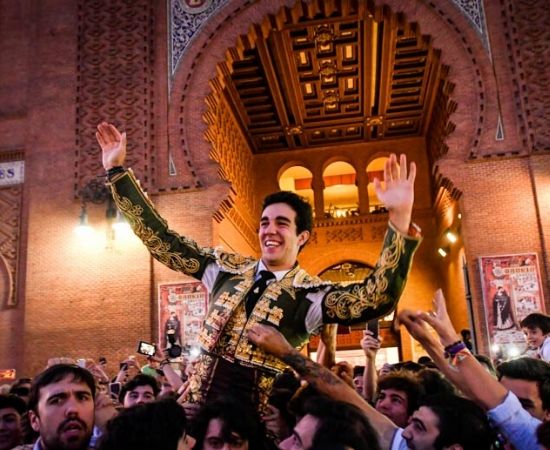 Tomás Rufo through the Puerta Grande in Madrid. Photograph by Plaza 1.

The 23-year-old from Madrid, the son of the former matador and current ‘banderillero’ Fernando José Plaza, demonstrated his intentions both at the Community Fair and at the last San Isidro Fair in Las Ventas.

On May 1, in front of steers from Montealto, he greeted an ovation and gave a round to the ring, leaving a very pleasant impression on the rows in which was his presentation to the fans of Las Ventas. He would return on May 20 with cattle from Conde de Mayalde and greeted another ovation.

Despite not having cut any trophies, his concept and good taste served him to be the winning steer-bullfighter of the most important fair in the world. Madrid, Zaragoza and Valencia saw him perform again this fall, in the final stretch of the year. The season ended with 24 bullfights and 13 ears cut. Fernando Plaza before the walk in Las Ventas. Photograph by Plaza 1.

Francisco Montero, the winner of the Golden Shoe

Another of the outstanding steer-bullfighters of 2019 has been the Francisco Montero from Cádiz, one of the surprises of the second part of the season. Born in 1992, he is a young man with little experience and a lot of race. He did not debut with horses until 2017 and in 2018 he fought only one bullfight, however he has been forged in the capeas and popular celebrations, a real ‘maletilla’.

2019 has seen him take off. He made his debut at Las Ventas on August 25 with demanding steers from Saltillo and immediately left the imprint of his great trade, greeting a standing ovation. Through the substitution way he made several walks later, such as Villaseca de la Sagra and his prestigious ‘Alfarero de Oro’, where he opened the Main Gate after cutting an ear to each of his Monteviejo lot.

Arnedo would be his great triumph, where he also entered replacing and ended up crowning himself. Goring included, he cut two ears the afternoon of September 28, in front of Partido de Resina steers, leaving on shoulders the Arnedo Arena.

Eight bullfights have been enough to be one of the winners of the season and make his way also in France, where he has also reaped important successes.

Francisco Montero the afternoon of his debut in Madrid. Photograph by Plaza 1. 20 years after his debut in the Seville arena, the one from Salteras will say goodbye to what has been one of his great bullrings Manuel…read more →