The King of the Bullfighters lost his life on May 16, 1920 in La Caprichosa, the Bullring of Talavera de la Reina

No one could imagine that José Gómez Ortega, Joselito or Gallito, would make the last walk of his life on May 16, 1920. The bullfighter of Gelves (Seville) shared the poster with his brother-in-law, Ignacio Sánchez Mejías. The fifth bull of the afternoon, named ‘Bailaor’ and belonging to the Viuda de Ortega fighting-bull ranch, gave him a deadly goring in his stomach.

The bullfighter of the Golden Age, the prodigy child and precursor of the current bullfighting, lost his life with only 25 years and a career of unmatched numbers. The society was shocked. Even the figure of the Esperanza Macarena Virgin, unusual, then dressed in mourning. Gallito had given her (in addition to the crown of the Reyes jewelry store and Muñoz y Pabón’s gold pen, among other things) the five rock crystal, white gold and brilliant ladybugs that adorn her. Ignacio Sánchez Mejías watches over the body of his friend, brother-in-law and partner Joselito hours after his death. Mythical photograph by Campúa published on May 19, 1920 in the magazine Mundo Gráfico.

Joselito was born on May 8, 1895, son of the bullfighter Rafael Gómez ‘El Gallo’ and the gypsy dancer Gabriela Ortega, niece granddaughter also of bullfighters. His two older brothers, Rafael (Gallito I) and Fernando (Gallito II) were also bullfighters, so little José, Gallito III, carried it in his blood. He also had three sisters who married three other bullfighters. Specifically, his sister Lola did it with the matador Ignacio Sánchez Mejías, who witnessed his fatal outcome.

The Gallo dynasty began with his uncle José, brother of his father and member of the crew of the matador Lagartijo, who was nicknamed by the little jumps he gave when putting the sticks.

The place where he was born, the Huerta del Algarrobo, was a farm owned by De Alba family where his father worked. There he began playing the bull and capes, while all the bullfighter from Sevilla visited the little bullring that the property had. 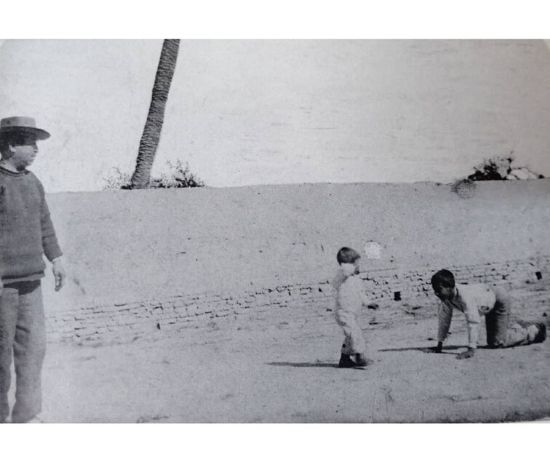 Joselito simulating the entrance to kill with his brother Fernando playing bull and his father Rafael watching them. Unknown author.

After the death of his father when he was five years old, they moved to Seville and began to frequent the Alameda de Hércules, a meeting place for bullfighters and artists. He debuted on May 13, 1908 in Jerez de la Frontera, with José Puerta, José Gárate and steers from Cayetano de la Riva. His style and his dominance of the fight impacted from the first moment and his career of steer-bullfighter was meteoric.

His brother Rafael (also known as the Divine Bald) gave him the alternative in La Maestranza in Seville on September 28, 1912. The witness was Antonio Pazos and the bulls were of the iron of Moreno Santamaría. Interestingly, his alternative was scheduled in Madrid the day before, but it was suspended because of the bad weather. He confirmed in the capital on October 1, also from his brother and with bulls from the Duke of Veragua. Joselito receives the alternative from his brother Rafael in Seville. Unknown author.

The King of Bullfighters

Joselito, with Juan Belmonte, starred in the Golden Age of bullfighting. The rivalry created between both in the arena (they were really good friends) marked a time of splendor and fervor in the bullrings. His premature death made him a legend and he is considered the most complete bullfighter in history.

He was not only a revolutionary in the arena, but also in the whole world of the bull. Together with the architect José Espeliú, he designed Las Ventas Bullring, and also participated in the one in Barcelona. But, without a doubt, the Monumental of Seville was his great project, built in San Bernardo and with twice the capacity of the Maestranza…but we tell you this story in the next post. Juan Belmonte and Joselito in one of the many bullfights they faced each other.

We’ll keep in touch passionate about bullfighting, to see more entries like this, check out our interesting categories …. 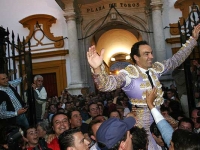 20 years after his debut in the Seville arena,El Cid will say goodbye to what has been one of his great bullrings Manuel Jesús Cid…read more →