As we told you in the previous post (100 years of Joselito’s death), the youngest of the Gallo was a visionary of bullfighting in and out of the ring. Precursor of the current bullfighting, also promoted the construction of the monumental bullrings that began in the early twentieth century.

The scenario of the time was that of the first social movements and the rights of the people, which began to have a voice. The evolution of bullfighting as a mass spectacle leads Joselito to think in places with greater capacity and cheaper tickets, so that the options of going to the entire population will be expanded; in addition to more comfortable spaces and more modern facilities for both the handle of the bulls and the public. The construction of the Monumental of Seville

In full swing of his career, Gallito has the support of his friend and businessman José Julio Lissen, who becomes a promoter of the construction of the dream of the matador from Gelves. In a field near San Bernardo neighborhood, where was Monte Rey Street (today Eduardo Dato), and under the orders of the architects José Espiau y Muñoz (reference of the time) and Francisco Urcola (old bullring El Chofre of San Sebastián, Monumental of Pamplona), the construction of the Monumental of Seville began in 1916.

Raised in reinforced concrete, the bullring had capacity for more than 23,000 spectators (almost double than the Real Maestranza) and had gates that allowed it to be filled and evicted fluidly as well as ample seating. It was inaugurated on June 6, 1918 by Joselito, Curro Posada and Diego Mazquiarán ‘Fortuna’, with bulls from Juan Contreras. Main Gate of the Monumental. Municipal Photolibrary of Seville.

The war with the maestrantes

The history of the Sevillian Monumental was controversial since the beginning. The war between those who supported Joselito and his idea of ​​making Seville the world capital of bullfighting and the maestrantes (owners of the Maestranza) and its influential environment (political institutions and media), which defended the exclusivity of the Maestranza, remained until the end of the bullring days.

During the building process, the site was subjected to load tests that delayed its conclusion due to the collapse of part of the structure. Later studies have shown that they were not regular tests and there is even talk of sabotage.

Once the Monumental was opened, the Maestranza had no choice but to lower the price of their tickets and the first two seasons took place bullfighters vetoes between one bullring and the other. The two great bullfighters of the time were one of each, because Juan Belmonte, Joselito’s eternal rival, remained faithful to the Arenal bullring, the Maestranza.

The third and last season, 1920, meant the coexistence of both, since they were managed by the same company. The April Fair  bullfights were divided between them and José Gómez Ortega  Joselito returned to the Maestranza and Belmonte debuted in the Monumental. Rows inside the Monumental of Joselito. Municipal Photolibrary of Seville.

The death of Joselito and the end of the Monumental

Gallito acted for the last time in his bullring on April 29, 1920, in a bullfight for the benefit of the Red Cross. Little more than two weeks later he would lose his life in Talavera de la Reina. The Monumental opened for the last time at the Fair of San Miguel that same year. After his death, the supposed security problems were raised again and in addition the businessman Lissen was economically depleted due to the First World War. The Civil Government closed it in 1921 and was demolished in 1930.

Today, at the confluence of Eduardo Dato and Diego Angulo Íñiguez Street, there is only a piece of the wall of the Monumental, with a blind access door and a memory in the form of tiles. 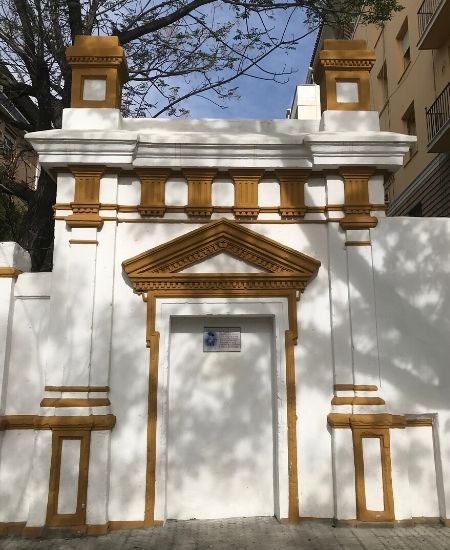 Part of the wall of the old Monumental that remains in Seville. Tiles that adorn the blinded door, placed in memory of the centenary of the Joselito El Gallo alternative. The history of the Vistalegre Bullring

The Madrid neighbourhood of Carabanchel, where the Vistalegre bullring is located, can boast of having been one of the most bullfighting areas in the country.…read more → We enter the tailor shops, craft workshops where bullfighters wear their dreams. Following the closure of the mythical Emilio Tailoring a few days ago, we…read more →