On Saturday, May 11, the front of the González Hontoria will light up, the fairgrounds of the city of Cádiz, and its sky will be covered with fireworks. From that moment, the horses, flamenco, sevillanas, local gastronomy and wine, will flow through its streets of ‘albero’ (yellow sand) and more than 250 booths that are inside.

This edition of the Horse Fair is dedicated to the Huelva town of Jabugo; fact that strengthens the union that has been established between its ham and the wine of Jerez as two of the main products of the Andalusian gastronomy and the cooperation between both localities. In fact, the two municipal corporations have launched ‘Las Dos Jotas’ brand for the joint promotion of their products.

The poster is a work by Juan Carlos Crespo, graphic designer of the Jerez City Council and author of it on five previous occasions; and wants to reflect the greatness and the “hug of the Horse Fair”. The circular shapes reflect the “always illuminated” sky of the Real. Poster of the Horse Fair 2019, work by Juan Carlos Crespo.

About the bullfighting part, Francisco Rivera ‘Paquirri’ is one of the protagonists for having chosen this scenario to return to dressing in lights. Paquirri said goodbye to the bullrings in the Goyesca of Ronda 2017, however, once again it is demonstrated that the bullfighters never stop being and it is really hard retiring definitely.

The season ticket, which will take place between May 16 and 18, is composed of three festivities. It will open the traditional bullfighting with horses, a classic that can not be missed in this land where the horse becomes absolute king during the month of May. 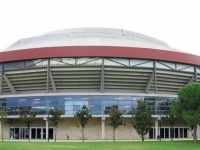 The most awaited Autumn Fair