The Bullring of Las Ventas celebrated last Friday the great Gala of San Isidro 2019 where the posters of the most important fair in the world were presented. A total of 34 afternoons that will start on May 14 and end on June 16: 26 bullfights, a mixed one, four with horses and three steer-bullfights where will act 48 bullfighters, 14 horse-bullfighters and nine young bullfighters.

The last-minute surprise was the incorporation of El Juli into the posters, initially out of Madrid bullfights, who finally will occupy the place left by Enrique Ponce, seriously injured, the afternoons of May 24 and Beneficencia, June 12.

39 irons of nine different origin will fight, highlighting the three appointments of Fuente Ymbro and the doubles of Alcurrucén and La Quinta. The gala was attended by S. M. Juan Carlos I who came accompanied by his daughter, Infanta Elena. The president of the Senate, Pío García Escudero, and the president of the Community of Madrid, Ángel Garrido; as well as different political representatives: Isabel Díaz Ayuso (PP), Santiago Abascal (VOX) or Diego Cruz Torrijos (PSOE). Among others gave speeches the responsible for Plaza 1, Rafael García Garrido and Simón Casas, and was enlivened by different musical performances.

Arrival of S.M. Juan Carlos I to Las Ventas. Fair of ‘La Peregrina’: the bastion of Galicia

Pontevedra celebrates its festivities in honor of the Virgin of 'La Peregrina', patroness of the province and also of the Way of  Santiago Portuguese The…read more → 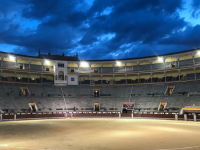 In less than ten days, the most important bullfighting cycle in the world will begin in Madrid: San Isidro Fair 2019 Actually, there are endless…read more →