The Spanish has always drawn attention to artists of all kinds and registration and has been a permanent source of inspiration. European painters of the nineteenth century, for example, considered our aesthetic as something exotic and this was reflected in women with shawls, mantelets or bandits wrapped in suits of lights.

Nowadays, fashion drinks directly from the most Spanish aesthetic until it has become a timeless classic. The frills, the polka dots, the fringes, the flowers…but also the embroideries in gold and black amber or directly the jackets and bullfighting pants are part of the most festive and elegant styles of some of the international fashion brands.

Some of the most important firms and designers in the fashion industry have based some of their collections in recent years in bullfighting and flamenco, with spectacular results at all levels.

The prestigious Italian firm already launched in 2011 a collection in which we could see light suits adapted to the catwalk and with a casual touch, mixing very worked jackets with jeans and heels, montera (bullfighter’s kind of hat) included! But it is that this 2019 and by the hand of its creative director, Jeremy Scott (who already designed the ‘bullfighting’ tracksuit for Adidas), has refilled the Milan runway of the colorful and the most typical forms of our country, with a collection called ‘Spanish’ for next spring / summer. The wealth of the light suit inspires Balmain

The French Maison presented a collection in 2012, with designer Olivier Rousteing at the head, with very rich garments, whose handwork was very similar to that of light dresses. Bullfighter jackets, with shoulder pads, with endless embroidery in white and gold, black amber, metal appliques, sequins, rhinestones, fringes…In addition to high-waisted pants with embroidery, combined with white blouses. Not in vain in his study hung pictures of bullfighters. Dolce & Gabbana and the April Fair

In 2015 (and after Stefano Gabbana enjoyed the 2013 Seville Fair), the two Italian designers launched one of the best campaigns to remember. With the image of the bullfighter José María Manzanares and the model Bianca Balti as protagonists, the collection was a true tribute to the Spanish folk aesthetic and our influence in Sicily. Ruffles, lace, carnations…all the elements present! Even suit of lights, ‘goyesco’ (with Goya time aesthetics) and ‘capotes’ (fuchsia capes). Tribute to the Spanish folk aesthetic

In 2013 it was the mythical American designer who was uploading a completely Spanish-inspired collection to the New York catwalk, and that’s what he called it. Bullfighter jackets, fringes, shirts with jackets, frills, Córdoba hats, pins and a lot of red closed Fashion Week with all the flamenco and bullfighting air whoever can imagine. Of course it is common to find in Spanish firms any wink or clear representation of our most folk roots but, without a doubt, seeing them on the catwalks around the world is an immense pride for us. Bullfighting aesthetics is so rich and handmade that any designer admires it and, for our enjoyment, many also dare to capture it! Surely you see yourself in an important event with one of the models we have shown you, right? 😉

In the next post we will bring you several national and international artists who show off our most own fashion with Spanish designs but also of large foreign houses. Parts of the bullfight (II); the third of pikes Fair of Málaga is ready

The Andalusian city celebrates from 12 to 19 of August its great Fair August is synonymous of feast. Most of the Spanish geography celebrates during…read more → 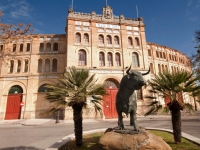