The Guadalajara Fair is held in honour of its patron saint, the Virgen de la Antigua, around 8 September.

Like most fairs, the Feria de la Antigua in Guadalajara has its origins in the Middle Ages, when agricultural, livestock and craft trade took place. However, the idle aspect took off in the 19th century, when the Town Hall changed the date of its celebration to October, to coincide with the end of work in the fields in the province, and promoted attractions, dances and different shows to attract visitors.

However, in recent years the original dates of the Virgen de la Antigua have been restored and September has become the key month in the capital of the Alcarria. This year in particular the festivities are held from the 6th to the 15th and the city is full of activities of all kinds. The peñas play a fundamental role in the fiestas, which begin with a parade after the chupinazo, accompanied by the charangas. The religious character is manifested in the solemn procession of the Virgin from the Church of the Fort of San Francisco to her Sanctuary through the most central streets of the city. The traditional and great Parade of Floats, the parades, the open-air dances and concerts, the giants and big-heads, the National Equestrian Competition, the fairground… and, of course, the running of the bulls which are then fought in the Coso de las Cruces, are the basis of the Fair and Fiestas. The great feat of Diego Ventura

The current number one of the horse-bullfighting will return to make history alone with six bulls in Las Ventas on October 6, as part of…read more → 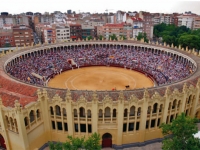 Albacete celebrates the Fair in honor of its patroness